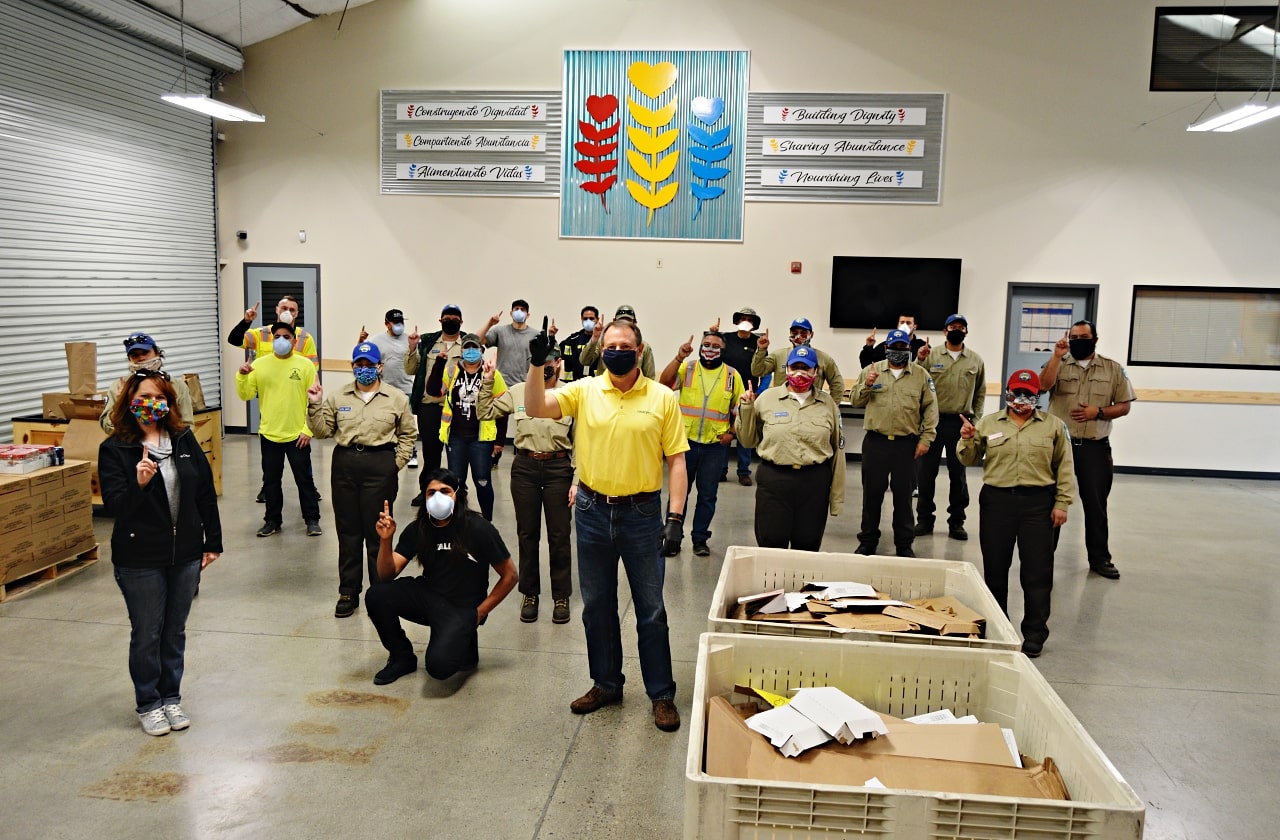 Since the COVID-19 crisis, Community FoodBank has reformatted its services and implemented protective measures for the safety of its volunteers, customers and staff. Recently, additional support for these essential efforts has come from an unexpected place.

Granite Construction is a company that is well known for community involvement, and VP of Quality, Scott West, was involved in discussions at an executive level about philanthropic outreach during the pandemic. West, with support and funding from Granite, wanted to make an impact near his home in San Juan Bautista.

“He had the ability to choose who to serve and thought about who would be in need the most in this season,” said Scott Kindred, Director of Communications for Community FoodBank. “He immediately thought of us. It was very much out of the blue; to my knowledge he had no prior connections other than the necessity of the circumstances. He was very clear about wanting to support people on the front line.”

That front line for Community FoodBank consists of regular volunteers, volunteers from the California Conservation Corps, and volunteers from the City of Hollister. This increase in volunteer staff has been vital to managing the increased demands on the food bank brought on by COVID-19. The food that is provided is 80% fresh (compared to a national average of 20% fresh and 80% shelf-stable), making Community FoodBank a much-sought-after resource under normal circumstances.

Volunteers from CCC and the City of Hollister have spent long hours sorting, packing, and distributing to-go bags in the drive-through, in addition to directing traffic created by the pickup line. This curb-side pickup has replaced the food bank’s Marketplace, allowing customers to stay in their cars and have bags of groceries brought to them; this is one of many efforts that the food bank has implemented to reduce the spread of COVID-19.

“Since we started our drive-through, sign-ups for food through Community Food Bank have increased eleven hundred percent,” said Kindred. West’s choice to support the food bank with volunteer meals funded by Granite Construction couldn’t have come at a better time. The gift of meals was an incredible thank you for the volunteer staff that have worked so hard in recent weeks.

West personally visited the food bank three times, bringing breakfast burritos on a Wednesday and pizza for lunch on a Friday and Saturday to feed the hard-working volunteer staff. His generosity produced the ripple effect of also supporting local businesses since he intentionally purchased meals from restaurants in Hollister—specifically the Country Rose Cafe and Round Table Pizza.

West also spent a notable amount of time at the food bank on each visit, talking with the volunteers, encouraging, and thanking them. He even brought family members with him on each visit. “He didn’t just drop off the food,” reflected Kindred, “He made a point to stay. He carried himself with sincerity and authenticity. His fallback was always humility; he said it was all about the volunteer team.”

Later on in the week, as West was delivering meals to yet another organization, he made a point of reaching out to Kindred, emailing, “I dropped off some pizzas at the San Benito County Public Assistance team today. They are directly behind the food bank. The line of cars was being pushed through the food bank quickly and efficiently. The whole team is doing a great job and providing such a necessary service to the community.”

West’s thoughtfulness in selecting the food bank, supporting local restaurants, donating his time, and checking back to share encouraging words, were a lovely acknowledgement of how vital and essential volunteers are to the food bank’s ability to respond adequately during this crisis.

The increase in monetary donations from individuals and grantors in this time has been phenomenal. With this generous gift of meals, Granite Construction joins the donors and volunteers whose philanthropy makes it possible for 97% of donations to go directly to food programs.

The mission for the Community Food Bank of San Benito County is “Building Dignity. Sharing Abundance. Nourishing Lives.” Although the specter of food insecurity looms large in this time of economic downturn, the spirit of hope looms larger. We are so thankful to Scott West and the team at Granite Construction for making this incredible food donation possible, and forever grateful to all our donors who continue to share their time, energy, and abundance as we serve our community.